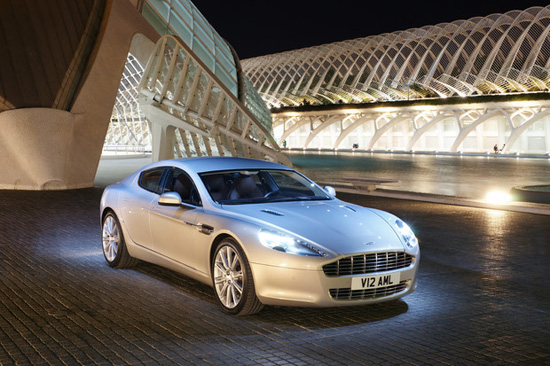 Aston Martin’s highly anticipated model — the Rapide — is finally here. The Rapide will list from $199,950 in the United States, and will become the British luxury sportscar maker’s only four-door model.

The Rapide will compete with vehicles like the Porsche Panamera, Audi A7 and the Mercedes CLS to name a few. But the Aston will likely be one of the most expensive and exclusive luxury sports sedans on the market, with standard features that include a Bang & Olufsen Beosound audio system, heated memory seats and Aston Martin’s Adaptive Damping Sytem. The Rapide features a hand-built 6.0-liter V12 engine producing 470 horsepower with peak power being delivered at 6,000 rpm and 443 pound-feet of peak torque at 5,000 rpm. A specifically tuned six-speed Touchtronic 2 automatic transmission allows the driver to change gears automatically or manually via the steering column-mounted magnesium paddles.

As one can see, the production version is very similar to the concept car, but does swap out quad-air intakes for upper and lower grilles. The rear of the car has strong family ties to other Aston Martin models, and sports ‘smoked’ rear taillights. Continuing its series of firsts and oddities for the brand, the Rapide is the first ever Aston Martin built outside of the United Kingdom, thanks to a partnership up with Magna Steyr. Given a strong interest in the Rapide, Aston Martin says it will build between 1,000 and 2,000 units per year, up from an original estimate of 500 or less.

Like Aston’s other models, the Rapide is built on the company’s VH (Vertical/Horizontal) architecture — the same that underpins the DB9. The Rapide will also borrow its twelve-cylinder powerplant from the DBS, DB9 and Vantage models — although power will be increased from 450 horsepower to 470. Thanks in part to the modest bump in power from the engine’s previous applications, the four-door Rapide will sprint from zero-to-60 mph in under five seconds, on its way to a top speed of 180 mph.

Continuing the successful brand partnership between Bang & Olufsen and Aston Martin, the Rapide is fitted standard with the 1000 watt BeoSound Rapide – a bespoke sound system tailored specifically to the Rapide. It includes 15 speakers that have been optimally located throughout the cabin to deliver the audiophile-level sound quality. While enjoying the BeoSound Rapide audio system, passengers and the driver alike will enjoy a full grain leather interior, accented with walnut trim, an iridium silver finish for the outer center console, and a graphite inner center console finish. Screens consist of Organic Electroluminescent displays, along with LED map and ambient lighting.

Options include cooled front and rear seats, a DVD entertainment system complete with a 6-disc player and two LCD screens, along with a myriad of interior finishes, such as: Eye Maple, Olive Ash Burl, Double Apex Alloy and matching wood door trim. Various other interior and exterior components can be customized as well, ranging from wheels, to brake caliper finish to Magnum silver rear lamp infills.

This entry was posted on Tuesday, August 3rd, 2010 at 3:09 am and is filed under Motorsports, Sports. You can follow any responses to this entry through the RSS 2.0 feed. You can leave a response, or trackback from your own site.