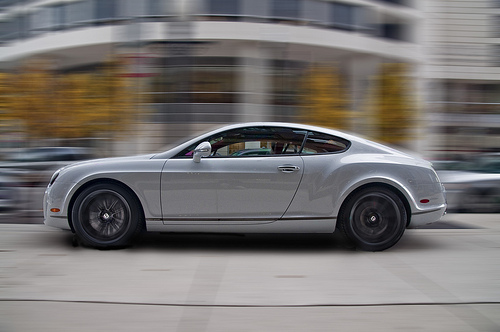 The Continental GT is not a sports car. Nor is the Continental Supersports. Nevertheless, both Bentleys do things that only sports cars can do, and the Supersports does some of them more quickly – like 0 to 60 in 3.7 seconds. The difference is in how they do it. In our review of the GTC Speed, we wrote that it achieves these feats by taking the goddess of physics hostage, forcing her to obey. Bentley should be commended for engineering a 5,182-pound beast to perform such feats at all, but it remains an act of coercion.

In the GTC Speed, though, the driver is separated from all that imperative violence by multiple layers of sound deadening, carpeting, wood and leather. If you really pay attention, you can catch a soupcon of the brute force wizardry being conducted somewhere in the Bentley’s deathly hallows, but why would you? There are 1,100 distracting watts of Naim audio to command the ears and a woman named Katerina or Genevieve or Summer in the front seat to command everything else.

The Supersports, on the other hand, requests your attention. Why? While the conversion to being a high-po ethanol coupe does involve more electro-mechanical magic, it’s primarily achieved the old fashioned way: less weight and more power.

A 243-pound reduction from a 5,000-pound car isn’t much – 4.86 percent, to be exact – but the Supersports drops weight in the right places. Unsprung mass has been reduced by 66 pounds with the addition of carbon-ceramic brakes and lightweight wheels, while the chassis gives up 20 pounds and the elimination of the rear seats, replacement of the wood with carbon fiber trim and the fitment of those carbon fiber seats nixes nearly 160 pounds. But a strict diet isn’t the only regime Bentley put the Supersports on.

As for Bentley’s flex-fuel plan, engineers hardened the valve seats, altered the gaskets and performed some sensors-and-software work to accommodate gasoline, E85, or any blend of the two. Power is calibrated to be the same no matter which fuel is used, despite ethanol’s higher octane.

And then, there’s the price — solidly in the if-you-have-to-ask range. The Bentley Continental GT Supersports will sell for nearly $280,000 when it goes on sale this year.

Tags: Bently, luxurious, Sports Cars
This entry was posted on Sunday, August 22nd, 2010 at 2:54 am and is filed under Motorsports. You can follow any responses to this entry through the RSS 2.0 feed. You can leave a response, or trackback from your own site.