Audi Quattro, will it be a reality?

This year marks the 30th birthday of Audi’s now famous quattro all-wheel drive system. One of the seminal Audi cars was a limited edition, short-wheelbase plastic-bodied extreme machine called the Sport Quattro, the vehicle that helped launch Audi’s successful run of world championship-winning rally cars. That car serves as the source of inspiration for the Audi Quatto concept, which was revealed at the 2010 Paris show. 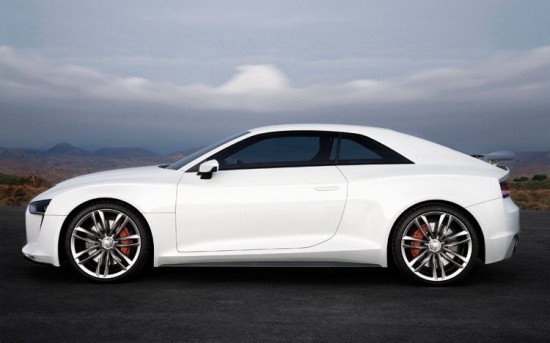 Loosely based on the Audi RS5, the Audi Quattro concept sits on a wheelbase that has been shorted by almost 6 inches. The rear overhang was shortened by 7.9 inches, and the roofline was lowered by 1.6 inches. Together, these reductions add up to a much tighter package and very aggressive look. To help bring the weight down to 2,900 pounds, roughly the same weight as the 1984 Sport Quattro, Audi replaced the steel body of the production RS5 with a custom aluminum spaceframe, covered with carbon fiber panels. The RS5’s V-8 and dual-clutch transmission was also swapped out for a turbocharged five-cylinder and a manual six-speed gearbox (another nod to the original car), further reducing weight.

Unlike the Sport Quattro, which was a 4 seater, the Quattro concept only has room for two adults and rolls on a 102.4-inch wheelbase. Behind the seats, there’s space for helmets, a roll cage, or a couple of fire extinguishers. The actual cargo deck extends further, with Audi opting for a classic trunk lid in place of a hatch. The undersides of the Quattro concept’s carbon body panels were left unpainted in another weight-saving measure.

With the exception of wheels, tailpipes, and a signature set of Audi LED light banks, the exterior is pretty straightforward. As a world first, the LED headlights boast dynamic components that vary from horizontal to vertical, and from slit-eyed to wide open. Instead of conventional turn signals, the new light units integrate amber streaks out front and moving yellow brackets at the rear.

Tags: Audi
This entry was posted on Tuesday, December 7th, 2010 at 1:53 am and is filed under Motorsports. You can follow any responses to this entry through the RSS 2.0 feed. You can leave a response, or trackback from your own site.

2 Responses to “Audi Quattro, will it be a reality?”