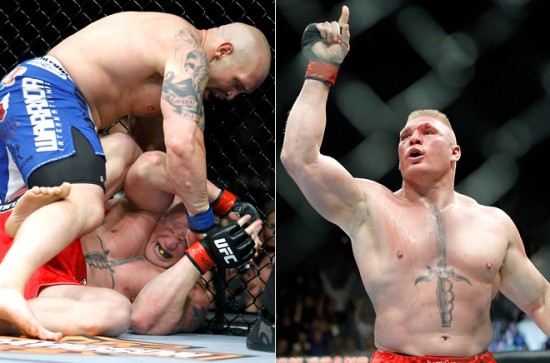 After a spectacular card filled with fights that drew fans in the sellout crowd at the MGM Grand Garden Arena out of their seats repeatedly, Shane Carwin seemed set to close the show in a major way. The interim Ultimate Fighting Championship heavyweight champion rocked champion Brock Lesnar with a crushing left hook early in the first round of their title unification bout and spent the rest of the round pounding on him relentlessly. Lesnar was pummeled like never before, but he managed to survive the round, and Carwin wasn’t able to do the same in the second. Lesnar took Carwin down early in the second, gained great position and slapped an arm triangle choke on Carwin. Carwin (12-1) was never able to move Lesnar and he was forced to tap at 2:19. “I stand before you a humble champion and I’m still the toughest S.O.B. around, baby,” Lesnar said. Lesnar (5-1) was taking huge shots on the ground, but he said he knew Carwin was tiring and that if he could hang in there, he would be all right. “I knew he was getting tired,” Lesnar said. “Each shot was less dramatic than the other.”

Tags: Brock Lesnar, MMA, Shane Carwin, UFC
This entry was posted on Sunday, July 4th, 2010 at 3:25 pm and is filed under MMA, Sports. You can follow any responses to this entry through the RSS 2.0 feed. You can leave a response, or trackback from your own site.