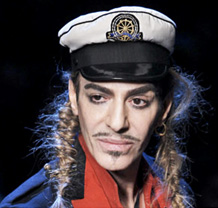 Creativity just oozes from this designers mind, with his outrageous headpieces, over-exaggerated silhouettes, and elegantly acute attention to detail. John Galliano has been dreaming up some of the most innovative and intricate designs this decade has seen for the House of Dior since 1997.

Being one of my favorite designers, I was shocked to hear that Christian Dior had fired Galliano from his position as head designer at Dior earlier this month. Even more shocking was the reasoning behind it. Word got out that Galliano had rudely made anti-semitic comments to a customer in a Paris bar, late last month. He was immediately suspended.  Soon after, two actual videos of him praising Hitler emerged from Paris citizens. In a video from last December, he yelled “I love Hitler…People like you would be dead. Your mothers, your forefathers would all be fucking gassed.” to a group of  Italian women.

John denies all allegations through his lawyer and did have fellow designer Patricia Field side with him saying “It’s theater… It’s farce. But people in fashion don’t recognize the farce in it. All of a sudden they don’t know him. But it’s OK when it’s Mel Brooks The Producers singing ‘Springtime for Hitler”

If he is found guilty, Galliano could face up to 6 months in jail or paying over $30,000 in fines. Understanding of past artists, it is typical that with such immense levels of creativity comes slight madness. Unfortunately for Galliano, he has to be held accountable for his actions just as everybody else would. As of right now, John is suspected to be at a rehabilitation facility and Christian Dior is on the prowl for a new head designer. Though he may have deserved to loose his position with Dior, it does not change the fact that Galliano still remains one of the top designers in the world, as well as one my favorites, and I hope that Dior’s new addition won’t be a disappointment.

Tags: anti-semantic, Christian Dior, Fashion Friday, Fired, John Galliano, Sasha Kiyoka
This entry was posted on Friday, March 25th, 2011 at 1:58 am and is filed under Fashion, Men's Fashion, Women's Fashion. You can follow any responses to this entry through the RSS 2.0 feed. You can leave a response, or trackback from your own site.