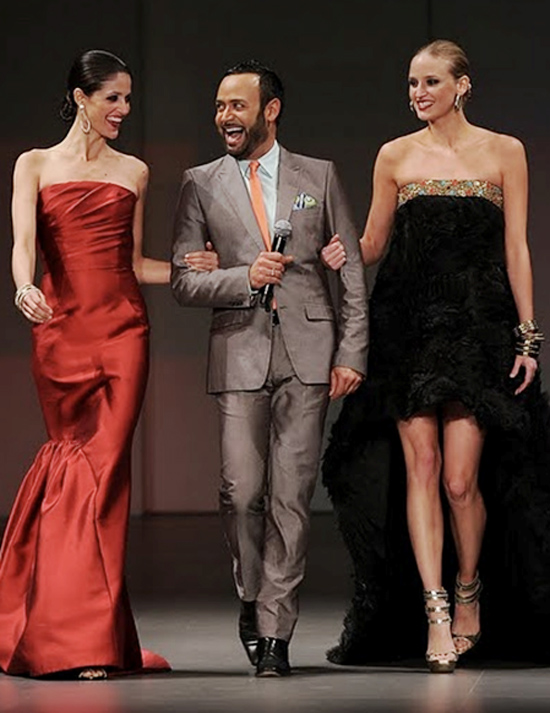 Where better than at a fashion school to find some of the worlds future designers? The Fashion Institute of Design and Merchandising in Los Angeles puts on a yearly spring fashion show that showcases some of the most creative and inspired pieces the school helped produce.This show attracts over 10,000 people in a period of 3 days and showcases the designs of students in FIDM’s Theater Costume Design and Fashion Design Advanced Programs along with work from the digital media, textile and Interior Design students.

This year the event took place on Friday March 18th at the Barker Hanger in Santa Monica, California. This beautiful 35,000 square foot location has played an important part in handfuls of major events here in southern California. The same show was shown each day, but different audiences were allowed on particular days. Day two ( Friday, March 18th, 2011) was the day that the current students (like myself) could come watch.

The event started up with the fabulous Nick Verreos, who is actually one of the Fashion Design teachers at FIDM ( I have seen him walking around the L.A. campus) walking the runway. For those who don’t know who that is, he is a former designer on Bravo’s Project Runway, a design show. He introduces a couple of his own dresses from his spring line and then the show actually begins. The first designer is a womens’ wear designer who was inspired by the beauty of sea sponges. He used a lightly color palette with some fun contrasting prints and overall has a very pretty feminine look and feel to his work. Ari Isoda was on the opposite end of the spectrum. Her pieces reflected her background in architecture and consisted of bold lines, prints, and colors. Next up was Pam Mbanga’s wild menswear collection which was said to be inspired by British tailoring and African textures and prints. Another menswear designer names Alexandra Paulus’ showed a few colorful and fun pieces inspired by the Edwardian Era. FIDM’s very first fashion collection for young boys was shown by Kamelia Stojanikova, you can see her inspiration from various 1930s looks. Very last but not least was Hualei Sun, A Chinese girl who used female characters in video games as her muse. Her dresses were beautifully crafted and had a soft, dreamy feel to it.

It is so refreshing to see all these hardworking fresh faces emerging into the industry and really gaining the attention and respect they deserve.  Who knows, the next Alexander McQueen could be amongst the fashion students of this generation. It really satisfys my soul knowing that these students have a chance to strut their stuff at FIDM and am looking forward to seeing new designs in the years to come.

Tags: Fashion Friday, FIDM, Sasha Kiyoka
This entry was posted on Saturday, April 2nd, 2011 at 9:17 am and is filed under Fashion, Men's Fashion, Women's Fashion. You can follow any responses to this entry through the RSS 2.0 feed. You can leave a response, or trackback from your own site.