“Green Street Hooligans” chooses an unexpected entry point into this world. Its hero is Matt Buckner (Elijah Wood), a bright Harvard student kicked out of school two months before graduating after his roommate forces him to take the fall for some cocaine found in their room. The Harvard business is not convincing but motivates Matt to visit his sister Shannon (Claire Forlani) in London. Her husband, Steve (Marc Warren), more or less forces his brother Pete (Charlie Hunnam) to take Matt to a football match. 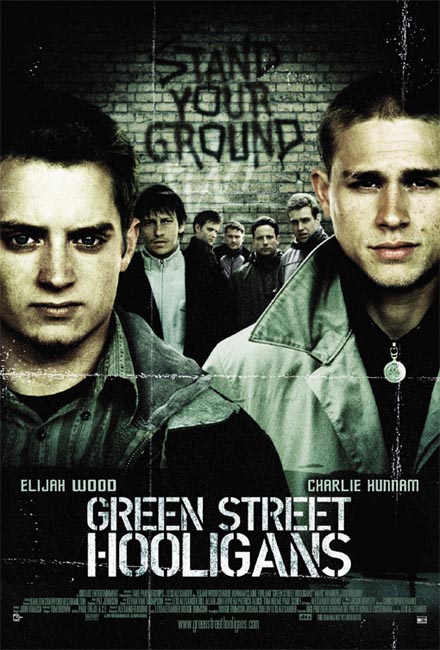 Wood, who can seem harmless enough to be cast as Frodo in “Lord of the Rings,” might appear to be the last person who’d be interested in the violent world of a firm. But the movie is about the way men who run in packs need to belong and to prove themselves. In a series of gradual stages, which are convincing because we see his early resistance wearing down, Matt tries to become accepted by the Green Street Elite. This involves fighting at their side, which he does with more recklessness than skill.

He has become addicted. He was a journalist at Harvard, an editor of the Crimson, and now he keeps a journal: “I’d never lived closer to danger — never felt more confident.” Life in the firm makes his previous life seem insubstantial and unreal; what is real is bonding with other men and beating the crap out of opposing firms.

Don’t assume you know who will die. It isn’t who you might think. Of the dead man, we are told: “His life taught me there’s a time to stand your ground. His death taught me there’s a time to walk away.” I guess the time to walk away is before you get killed standing your ground, unless you have a very good reason for standing it. The most frightening thing about the Green Street Elite is the members think they have such a reason, and it is loyalty to the mob.

This entry was posted on Wednesday, March 2nd, 2011 at 12:44 am and is filed under Random. You can follow any responses to this entry through the RSS 2.0 feed. You can leave a response, or trackback from your own site.