Opening to many mixed reviews Hangover II still managed to rake in over 137 Million this Memorial day weekend. It was one of the most anticipated sequels of the summer. And while some may have been disappointed by this “just like the original, transplanted to Thailand” the general consenses were not. (Only 33% positive reviews on Rotten Tomatoes going into this weekend. But moviegoers gave the pic an “A-“.) Hangover 2 opened after midnight Thursday in a wide 2,600 locations with $10.4 million. That set the record for the highest grossing R-rated midnight show. (The previous record was Paranormal Activity’s $6.3M.) And is the biggest 3-day weekend comedy debut ever, beating The Simpsons Movie’s $74M. 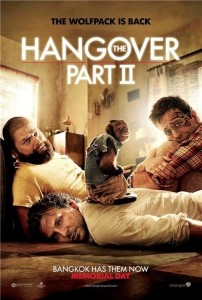 Doubling down on the formula that made “The Hangover” the most successful R-rated comedy ever, “Hangover II” leaves no avenue unexplored in its relentless quest to assault sensibilities, and breach taboos. The premise is pure deja vu. On the day following a bachelor party for Stu, he awakens alongside Phil and Alan in a decimated hotel room. The men have pounding heads, physical disfigurements of mysterious origin, amnesia about what went on the night before, and no clue where the fourth member of their party has disappeared. This time it happens in Thailand and the AWOL friend — Stu’s teenage brother-in-law-to-be — isn’t entirely gone. He left behind his college ring, with his finger still in it. Paraphrasing the line immortalized by Catherine O’Hara in “Home Alone 2,” Phil moans, “It happened again!”

And how. Repeating the structure of the first film beat for beat, writer-director Todd Phillips keeps things fresh by going sleazier and more depraved, a litany of pain and suffering played for laughs. It’s one part comedy to four parts juvenile delinquency.

They discover neon-lit shopping districts the Bangkok Tourist Board  doesn’t publicize. They’re terrorized by underworld types, shot at by motorcycle goons, saddled with a corpse, mocked by the police, beaten by a Buddhist monk, loved up by a showgirl with unexpected attributes, and serenaded by a former heavyweight champ who perpetrates some of the worst singing ever recorded. Their only friend is a chain-smoking capuchin monkey, and tobacco is the least of its oral fixations.

Ken Jeong’s fey, obnoxious gangsta-talking crime lord Mr. Chow also makes a return. He reprises the role here, taking it to wilder reaches of insanity, posing for a still photo in the end credits montage that is so appallingly tasteless in its recreation of a historical outrage that it’s nearly genius.

So although it lacks the suprise element the first film had, it is still a great time.  While some sequals get lost in trying to hard to be unique, this movie losses its pow being to much the same. It instead attempts to one up everything from the first.

In The Hangover Part II, Phil (Bradley Cooper), Stu (Ed Helms), Alan (Zach Galifianakis) and Doug (Justin Bartha) travel to exotic Thailand for Stu’s wedding. After the unforgettable bachelor party in Las Vegas, Stu is taking no chances and has opted for a safe, subdued pre-wedding brunch. However, things don’t always go as planned. What happens in Vegas may stay in Vegas, but what happens in Bangkok can’t even be imagined. — (C) Warner Bros

Tags: Alan, Bradley Cooper, Doug, Ed Helms, Hangover, Hangover II, Justin Bartha, Movie Review, MyEvilStar, part II, Phil, Review, sequal, Stu, Thailand, Zach Galifianakis
This entry was posted on Wednesday, June 1st, 2011 at 1:14 am and is filed under Random. You can follow any responses to this entry through the RSS 2.0 feed. You can leave a response, or trackback from your own site.