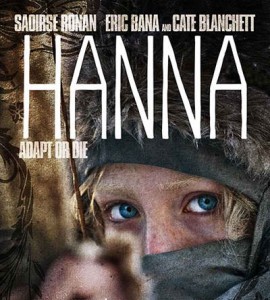 Synopsis: A teenage girl goes out into the world for the first time – and has to battle for her life. Director Joe Wright weaves elements of dark fairy tales into the adventure thriller Hanna, filmed on location in Europe and Morocco. Hanna (played by Saoirse Ronan) is 16 years old. She is bright, inquisitive, and a devoted daughter. Uniquely, she has the strength, the stamina, and the smarts of a soldier; these come from being raised by her widowed father Erik (Eric Bana), an ex-CIA man, in the wilds of North Finland. Erik has taught Hanna to hunt, put her through extreme self-defense workouts, and home-schooled her with only an encyclopedia and a book of fairy tales. Hanna has been living a life unlike any other teenager; her upbringing and training have been one and the same, all geared to making her the perfect assassin. But out in the world there is unfinished business for Hanna’s family, and it is with a combination of pride and apprehension that Erik realizes his daughter can no longer be held back.

‘Hanna’ is a first-rate thriller. It opens to a teenage girl killing a deer with her bow and arrow, as she’s gutting the carcass, a man sneaks up behind, “You’re dead!” She engages in a fierce hand-to-hand battle with this man, who turns out to be her father.

Gradually most, not all, of the details come clear. Hanna has been taught advanced and ruthless killing skills as a means of self-defense against her enemies. Her father, Erik, fears for her safety and his own. He is apparently an agent whose skills and knowledge are so formidable that a CIA officer named Marissa (Cate Blanchett) is obsessed with capturing him — and the child.

We know that Marissa has found the house in the woods. Hanna and Erik don’t know that, however. Erik decrees it is time for Hanna to test her survival skills in the real world, but when he sets her free, they’re both quickly discovered by Marissa’s CIA hunters.

Consider how hard it is to be Hanna. You have never known anyone your own age. You have apparently never met a woman. You speak several languages fluently. You are the master of martial arts and adept at many weapons. Your dad has drilled you to memorize every word in a one-volume encyclopedia that looks like it came as a free gift for opening a new account at a savings & loan. So you are all topped up on facts but have no knowledge at all of the real world.

It’s quirky, has something to say, a certain wit and a command of the visual poetry of action. There is nevertheless something disturbing about the conversion of little girls into ruthlessly efficient fighters who can kill dozens of people and not give it a second thought.

Joe Wright demonstrates that action movies need not be mindless. There is a role for creative choreography in them, even in largely CGI scenes like a chase sequence involving shipping containers on a dock. Even when human bodies are not really there, their apparent movements must be choreographed, and that sequence is a beauty.

“Hanna” is good, sound filmmaking. It depends on stylistic order and discipline, a clear story map and ingenious action sequences. It is not all banging and flashing.  To see a movie like this is to gain a new understanding of the mindless confusion of something like “Battle: Los Angeles.”

Tags: Hanna, Movie Review, Movie Trailer
This entry was posted on Monday, April 11th, 2011 at 1:24 am and is filed under Random. You can follow any responses to this entry through the RSS 2.0 feed. You can leave a response, or trackback from your own site.