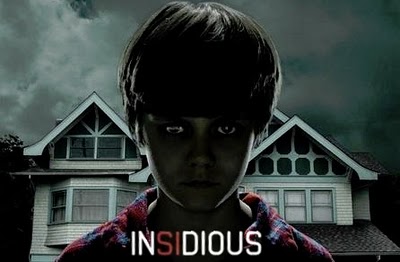 Plot Synopsis:
Josh and Renai have three children, the oldest is ten-year-old Dalton. As they begin to settle into a new home, they experience strange noises and other unexplained phenomena. Soon Dalton is rushed to the hospital in a coma, suffering a severe head injury after falling in the attic. Months slip by, and the doctors still have no explanation for his continuing coma. When the boy is returned home under his mother’s care, more frightening events occur in the home. The mother is so horrified that she moves the family to a another new home in hopes of leaving the fearful memories behind them.

The family quickly discovers that the haunting has nothing to do with their home. The supernatural outpouring is coming from their comatose son. Several scientific experts observe the son, the family and their home. They determine that Dalton is trapped on the other side in a dark world they call “The Further”. The parents team with the scientists to try to bring their boy back from The Further and save him from the clutches of a dark entity that hopes to claim him as his own.

PG13 means instead of a lame gore-fest, it’s actually going to﻿ have to focus on psychological horror, which IMO is much scarier.

This entry was posted on Wednesday, March 16th, 2011 at 1:09 am and is filed under Random. You can follow any responses to this entry through the RSS 2.0 feed. You can leave a response, or trackback from your own site.