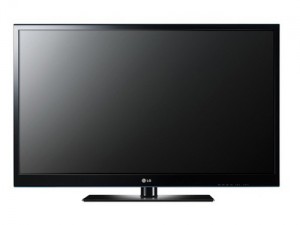 The 60PK950 is LG’s top-of-the-line plasma TV for early 2010. While more attention seems to have been paid to their LED televisions, the PK950 series features a robust internet package and (most likely) 3D display. While the TV certainly looks appealing, the price looks even better($2799.99 on average).

The front of the LG 60PK950 is, as you might expect, a gigantic screen. Overall, the design is quite beautiful. The bezel width has only decreased in a size a little since last year – at least that’s how you see it from the front. The TV’s overall width has slimmed considerably; more on that further down this page. However, on a 60-inch TV, the bezel is certainly not going to draw as much as attention as they are on a 32-inch TV. Along the bottom right side, there are a series of touch-sensitive buttons for power, volume, channel up/down, menu, and input select. The high-gloss surface is guaranteed to pick up fingerprints if you plan on using these buttons, or if you plan on swiveling it back and forth very often.

The LG 60PK950 has slimmed down by a reported 35%, going from approximately 2 inches to 1.5 inches. Yes, we’re aware those numbers don’t quite match up, but these are the numbers LG is providing. Anyway, the thing got slimmer. Enjoy it. The PK950 series also shed about 40% of its weight since last year.

The right side is completely blank. The left side has a small jack pack for easy access ports.

The LG 60PK950 is a plasma television, displaying at 1080p. It builds on the technology from last year’s predecessors, but LG is expected to make some performance gains. First, the glass in the display is thinner, which not only makes the unit weigh less, but is reported to enhance the appearance of dark colors. It should also reduce the amount of bounce-back reflection, an annoying phenomenon that occurs in plasma TVs in which the glass reflects the image back on itself, creating a halo effect around objects when you look at them from an angle.

LG is also planning on enabling the PK950 series for 3D display, but that particular detail has not been confirmed. If it’s true, it makes sense. The leading TV manufacturers are kicking off 2010 by putting the 3D option on their top series. Like many others, LG is using Active Shutter technology, which requires glasses (and likely expensive glasses, though prices are not available yet).

The LG 60PK950 is one of the few 2010 LG televisions to use the new Magic Motion Plus remote control, along with the LE9500 and LEX9 (which was not on display on the show floor). This is a far cry from the traditional control that’s laden with dozens of buttons. Instead, LG is experimenting with ways to revamp your entire experience. The new Magic Motion Plus functions very much like a Nintendo Wiimote. It’s a pointer, to put it simply. You point at the screen, and a little arrow on the screen moves around. You already perform this action hundreds of times a day with a mouse, so you’re off to a pretty comfortable start. A large, round button in the center of the remote is like the Enter button, or a left mouse click.

Tags: Electronics, Gadgets, LG, Plasma, Tech
This entry was posted on Tuesday, July 20th, 2010 at 12:01 am and is filed under Tech.. You can follow any responses to this entry through the RSS 2.0 feed. You can leave a response, or trackback from your own site.