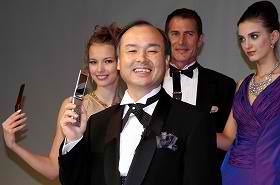 Masayoshi Son (Softbank CEO) donated ¥10 billion to “support the region and people affected by the March 11 earthquake and tsunami”, that equates to just under $120 million American. One might say the sum is pocket change for Japan’s wealthiest citizen, but he has also vowed to “donate to the same cause all of his future compensation as the head of Softbank.”

Softbank had already stepped up to the plate by offering free handsets to earthquake orphans following the horrific events that transpired last month.  But now on top of Son’s personal donations, Softbank as a company will also be handing over ¥1 billion, with both the man and his entity considering various channels for which the money will be distributed. We’ve got a feeling this is just a bit more serious than your average PR stunt.  We applaud you Masayoshi Son and your company.  Bravo

This entry was posted on Tuesday, April 5th, 2011 at 12:57 am and is filed under Random, Tech.. You can follow any responses to this entry through the RSS 2.0 feed. You can leave a response, or trackback from your own site.