Poizin Reserve by Armida Winery is a big zinfandel in a little coffin. The Healdsburg winery brags that this “wine to die for” is a blend of its best zinfandel grapes.   The 2005 and 2006 Reserves are best suited for wine lovers who enjoy a bold zinfandel and aren’t frightened by the $60-$90 price tag.  The Reserves’ less expensive cousin, the 2007 Poizin for $25, doesn’t come in a coffin but does present a lighter, fruitier zin.  If you’re visiting Northern California, you may want to stop by the winery for a taste and play a game of Bocce ball on their lakeside courts.  I would have to say, I didn’t really care about trying the wine once I seen the package. I fell in love with it as soon as I seen it and ordered a bottle along with the really cool coffin. 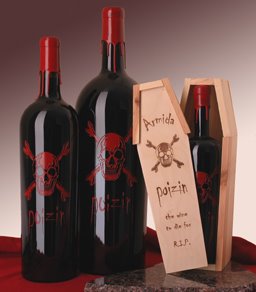 Tags: PoiZin, Review, wine
This entry was posted on Wednesday, September 15th, 2010 at 10:09 pm and is filed under The Pub. You can follow any responses to this entry through the RSS 2.0 feed. You can leave a response, or trackback from your own site.