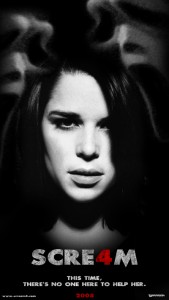 Synopsis: In Scream 4, Sidney Prescott, now the author of a self-help book, returns home to Woodsboro on the last stop of her book tour. There she reconnects with Sheriff Dewey and Gale, the newscaster who is now his wife, as well as her cousin Jill (played by Emma Roberts) and her Aunt Kate (Mary McDonnell). Unfortunately Sidney’s appearance also brings about the return of Ghostface, putting Sidney, Gale, and Dewey, along with Jill, her friends, and the whole town of Woodsboro in danger. The newest installment in the acclaimed franchise that ushered in a new wave of horror in the 1990s is written by series creator Kevin Williamson and directed by suspense master and director of the first trilogy, Wes Craven. The film stars Neve Campbell, Courteney Cox-Arquette, David Arquette, Emma Roberts, Hayden Panettiere, Rory Culkin, Anthony Anderson, Adam Brody, Mary McDonnell, Marley Shelton, Nico Tortorella, Marielle Jaffe, Kristen Bell, Anna Paquin, Lucy Hale, Shanae Grimes, Aimee Teegarden and Brittany Robertson.

For a franchise that is based on charcters knowing the rules and order of horror movies, such as who will die next.  They sure don’t know when to let one go. Please just let the Scream series die already. The first was epic in its’ concept, but its getting old now, they are trying way to hard.

It opens with a clever series of horror scenes that emerge one from another like nested Russian dolls. All through the movie, “Scre4m” lets us know that it knows exactly what it’s up to — and then goes right ahead and gets up to it.

Neve Campbell returns as Sidney Prescott, a hometown girl who has written a best seller and has returned to Woodsboro. A town which has already seen so many fatal slashings, why anyone still lives there. to promote it. My own inclination would be to stay the hell away from the location of the killings in the original “Scream,” but hey, that’s just comon sense which has no buisness in horror films.  The body count in “Scre4m” mounts relentlessly until you wonder whether everyone in the cast is going to be killed, with the movie ending on an empty room (with the phone ringing).

Sidney’s cousin Jill (Emma Roberts) has a posse of fellow teenagers who spend most of the time picking up the phone and answering the door when they absolutely shouldn’t. They know that in a horror movie when you walk past a dark doorway something is likely to jump out at you. But when they get a call from someone saying “my face will be the last sight you see,” and then the doorbell rings — do they answer it?

Maybe that’s the point. Per­haps Craven and Williamson are making an ironic and cynical comment on the bloody tradition of the genre. “Scre4m” provides exactly what its audience will expect: one victim after another being slashed, skewered, stabbed, gutted and sliced, with everyone in on the joke. Maybe that’s your idea of a good time.

Tags: Movie Review, Scre4m, Scream, Wes Craven
This entry was posted on Monday, April 18th, 2011 at 1:03 am and is filed under Random. You can follow any responses to this entry through the RSS 2.0 feed. You can leave a response, or trackback from your own site.