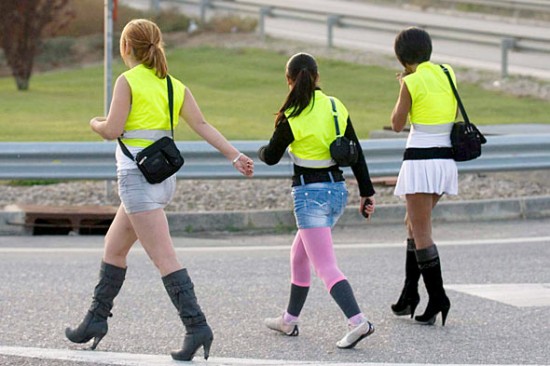 Unfortunately, some of the hookers in Spain haven’t been able to get safety vests because there are not enough of them to go around. Aww…poor hookers. Those same Spanish prostitutes are now being fined for what they don’t feel is their fault. The safety vests law is in effect in the city of Lleida where some believe that the Mayor Joseph Maria Bia has an ulterior motive. Several people believe that Joseph Maria Bea is only enforcing the safety vests law as a means of ridding Lleida of prostitutes.

Prostitution will always be around, so why aren’t the laws being geared towards educating these working girls on safe sex and not just safety vests? Seriously, there’s nothing wrong with safety vests for one’s chest but what about a safety vests for other parts of one’s body aka condoms? Wouldn’t condoms and safe sex be the safest thing to promote?

Speaking about Spanish prostitutes being forced to wear safety vests, a spokesman for the police officers said, “In the past couple of months the prostitutes have been fined for two reasons: for not wearing the reflective jacket and for creating danger on the public highway.” There are an estimated 300,000 Spanish prostitutes walking the streets of Spain and only a percentage of those are in safety vests. Wow, 300,000 prostitutes!!! I really need to go to Spain!!!

This entry was posted on Friday, October 29th, 2010 at 12:30 am and is filed under Random. You can follow any responses to this entry through the RSS 2.0 feed. You can leave a response, or trackback from your own site.