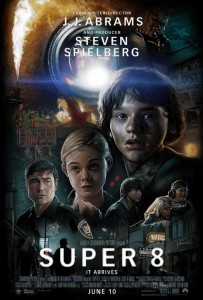 The trailers give very little to draw from, Super 8 from the start lays a foundation of mystery to the story and for once it didn’t give too much away. And while the mystery is intriguing in its own right, it says something about the strength and conviction of the storytelling when the movie works in spite of it. The tension surrounding whatever escaped from that train car will lure people into theaters, but it’s the human elements that will stay with them after they leave.

A period sci-fi thriller set in 1979, around a small Ohio town.  The film follows a group of middle school students making a zombie movie on their summer vacation. One night, while shooting at an empty train station, a pickup truck drives onto the tracks and collides with an oncoming train. The kids survive and discover the truck’s driver is one of their own school teachers. He points a gun at them and tells them to run away just before the military arrives. It happens that their film camera was running the entire time and caught footage of some very confidential cargo. When the locals start to disappear and even the inquisitive deputy can’t come up with answers, suspicions emerge. As the truth finally comes out, no one is prepared to learn what now stalks the unsuspecting citizens of this once quiet community.

A solid piece of family entertainment, the plot of Super 8 is but an engine for a greater emotional story.

Tags: j.j. Abrams, Movie Review, Steven Spielberg, Super 8
This entry was posted on Wednesday, June 22nd, 2011 at 4:16 am and is filed under Random. You can follow any responses to this entry through the RSS 2.0 feed. You can leave a response, or trackback from your own site.