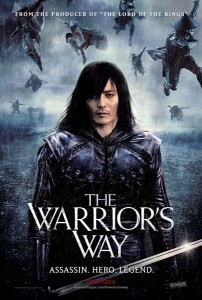 The Warrior’s Way, a visually-stunning modern martial arts western starring Korean actor Dong-gun Jang who plays an Asian warrior assassin forced to hide in a small town in the American Badlands. Rounding out the ensemble cast are Kate Bosworth, Oscar-winner Geoffrey Rush, Danny Houston, and Tony Cox. The fantasy action film was written and directed by newcomer Sngmoo Lee, and is being produced by Barrie Osborne, Michael Peyser and Jooick Lee.

This entry was posted on Saturday, December 4th, 2010 at 2:08 am and is filed under Random. You can follow any responses to this entry through the RSS 2.0 feed. You can leave a response, or trackback from your own site.