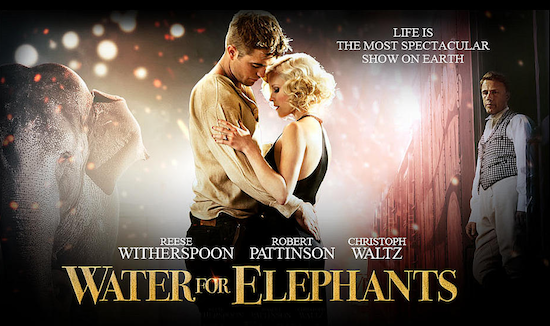 Based on the best-seller by Sara Gruen, is told as a flashback by an old man named Jacob (Hal Holbrook), who lost his parents in 1931, dropped out of Cornell University’s veterinary school, hit the road and hopped a train. Played by Robert Pattinson as a youth, he is naive and excited, and his eyes fill with wonder as he sees the beautiful Marlena (Reese Witherspoon) on her white show horse. The owner August (Waltz) is prepared to throw him off the train until he learns young Jacob knows something about veterinary medicine.

In an age of prefabricated special effects and obviously phony spectacle, it’s sort of old-fashioned (and a pleasure) to see a movie made of real people and plausible sets. The production designer, Jack Fisk, has created a believable one-ring circus here, and even the train itself has a personality.

The dynamic in the story depends on August’s jealousy of Marlena, and her stubborn loyalty to their marriage contract. This is where Waltz makes his contribution. Shorter than Pattinson, indeed hardly taller than Witherspoon, he rules over everyone as a hard-bitten taskmaster whose easy charm conceals a cold inner core; it’s the same dynamic he used as the merciless Nazi in “Inglourious Basterds.” He’s much given to offering champagne toasts with a knife hidden inside.

In the early Depression, times are hard and jobs few. The circus is deep in debt, and August produces a new star attraction he believes can save it. This is Rosie, a middle-aged elephant, who he thinks Marlena can ride, and Jacob can train and care for, although neither has worked with an elephant before. Scenes involving the personality and language comprehension of elephants create an intrinsic charm, and the movie surrounds them with a convincing portrait of circus life on the road.

“Water for Elephants” was directed by Francis Lawrence, whose “I Am Legend” and “Constantine”. The screenplay is by Richard LaGravenese, whose “The Horse Whisperer” also showed a sympathy for the personalities of animals. Rosie is not as charismatic as a horse, but you have to concede that her timing is impeccable. This is good sound family entertainment, a safe PG-13.

Tags: Movie Review
This entry was posted on Monday, April 25th, 2011 at 2:57 am and is filed under Random. You can follow any responses to this entry through the RSS 2.0 feed. You can leave a response, or trackback from your own site.

One Response to “Water for Elephants”