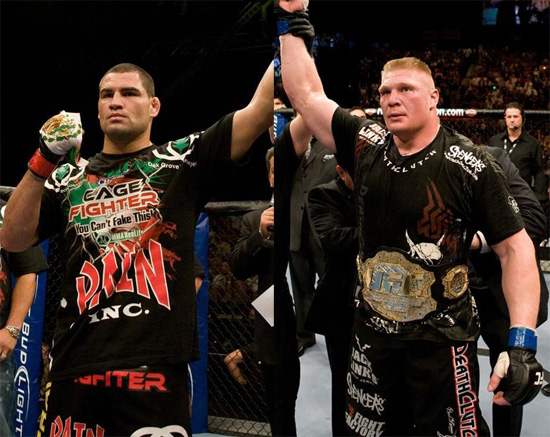 Update: Brock Lesnar’s next fight has become official. He’ll be taking on Cain Velasquez at UFC 121 on October 23, 2010, at the Honda Center in Anaheim, Ca. If that sounds soon, it isn’t soon enough for UFC president Dana White. White attempted to headline UFC 119 in September with Brock Lesnar vs. Cain Velasquez. The combination of a new child in the Lesnar household and allowing proper time to let his cuts heal made Lesnar unavailable for such a quick turnaround. This is quite a difference for Lesnar who went twelve months between his last two fights. Ironically this is the same exact time line that was planned between Lesnar’s last two fights. Lesnar vs. Carwin was signed originally for UFC 106 in October 2009, coming off Lesnar’s win over Frank Mir last July. UFC 106 was the first of several cancellations for Lesnar who was battling diverticulitis. Lesnar had no problem mentally or physically accepting such a quick turnaround last year (until he got sick), so I see no problem with Lesnar getting back in the octagon so soon. It’s Lesnar’s challenger who may be the one with layoff issues coming into UFC 121. Velasquez’s last fight was a first round knockout win over Antonio Rodrigo Nogueira in February. That is an eight month layoff between fights for Velasquez. Velasquez did have a seven month layoff between fights in 2008-2009. The layoff didn’t impact him in any way as he beat Denis Stojnic with a TKO in the second round and won Knockout of the Night. Of course fighting Denis Stojnic and Brock Lesnar are not exactly one in the same (no way the same at all). On paper it doesn’t look like Velasquez has a prayer in this fight. I think the Cheick Kongo fight exposed Velasquez’s weakness against capable strikers on his feet and Brock Lesnar is certainly a capable striker. Kongo was able to give him problems when they were on their feet. Unfortunately for Kongo, Velasquez is an outstanding wrestler who dominated Kongo on the ground. Velasquez won’t be able to dominate Lesnar on the ground, he certainly won’t be able to stand with him, and he will be greatly out-sized, so how can he beat Lesnar? The only hope in my opinion is that Velasquez has is to draw the fight out for five rounds because Velasquez does have outstanding cardio. Grinding out five rounds with Brock Lesnar is a lot easier said than done. Then again, these are the kinds of fights where upsets normally happen.

Tags: Brock Lesnar, Cain Velasquez, California, MMA, UFC
This entry was posted on Saturday, July 17th, 2010 at 2:05 am and is filed under MMA, Sports. You can follow any responses to this entry through the RSS 2.0 feed. You can leave a response, or trackback from your own site.

One Response to “Brock Lesnar vs. Cain Velasquez – It’s Official!!!”