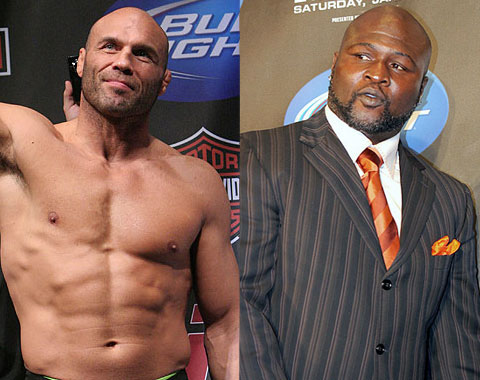 Couture looks as relaxed as can be, smiling in the cage. Toney a bit more tense, pacing back and forth. He’s got ankle wraps on both feet. The two touch gloves before the opening bell.

Round 1: Toney’s on the ground in 15 seconds. Couture straight to mount. He usually prefers side control. The crowd chants “UFC! UFC!” Couture lands hard strikes from the top. Toney is so wide that Couture has a tough time staying on top, but he takes him to the cage. Still in full mount. Toney’s survived midway through. Couture goes to the arm triangle. Toney survives that too. Couture is still on top. It’s one-sided but Toney survives. Couture goes back to the arm triangle. This time he advances position and locks it in, and Toney taps out.

Toney goes over to shake Couture’s hand after the fight.

This entry was posted on Sunday, August 29th, 2010 at 12:14 am and is filed under MMA, Sports. You can follow any responses to this entry through the RSS 2.0 feed. You can leave a response, or trackback from your own site.

One Response to “Randy Couture wins over James Toney!!!”