From director Todd Phillips, “Due Date” stars Robert Downey Jr. and Zach Galifianakis as two unlikely companions who are thrown together on a road trip that turns out to be as life-changing as it is outrageous.  Downey plays Peter Highman, an expectant first-time father whose wife’s due date is a mere five days away.  As Peter hurries to catch a flight home from Atlanta to be at her side for the birth, his best intentions go completely awry when a chance encounter with aspiring actor Ethan Tremblay (Galifianakis) forces Peter to hitch a ride with Ethan—on what turns out to be a cross-country road trip that will ultimately destroy several cars, numerous friendships and Peter’s last nerve. 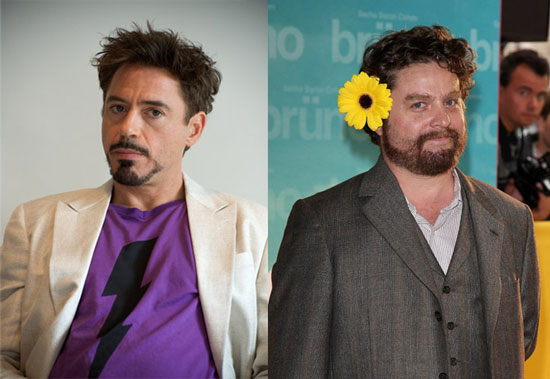 The film is being produced by Phillips and Dan Goldberg, who previously collaborated on “The Hangover.”  The behind-the-scenes creative team from “The Hangover” returns, including director of photography Lawrence Sher, production designer Bill Brzeski, editor Debra Neil-Fisher and costume designer Louise Mingenbach.

This entry was posted on Friday, November 5th, 2010 at 2:53 am and is filed under Random. You can follow any responses to this entry through the RSS 2.0 feed. You can leave a response, or trackback from your own site.