Dwayne Johnson Returns on screen as “the Rock” in FASTER.  Although his charcter is officially titled “driver” old fans will recognize the on screen presence of the wrestler people loved to hate.  FASTER (Directed by: George Tillman Jr. Written by: Tony Gayton and Joe Gayton CoStarring: Billy Bob Thornton, Oliver Jackson-Cohen, Carla Gugino, Maggie Grace) reminded me of the “Drive-in Films” of the 70’s when macho existentialists drove muscle cars across the California desert just for the pleasure of killing each other. Cars screeching backward, forward, and sideways, and when people in this movie die, they die brutally. But the script by Tony and Joe Gayton is just as interested in the ways guilt and vengeance can warp a soul, and it pulls a sharp performance from Thornton as a dirty little man trying to wash himself clean. 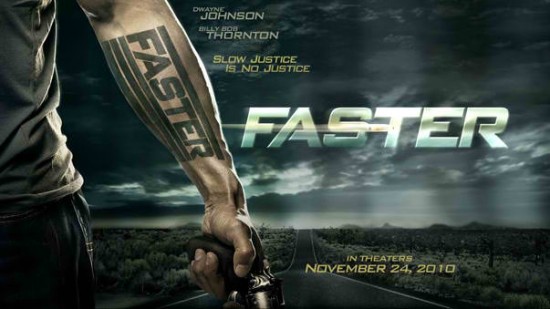 AntiHero Rock plays “The Driver,’’ released from a 10-year prison stretch embarks on a methodical quest to avenge himself against the crew that murdered his bank-robbing brother (Matt Gerald).  Billy Bob Thornton “The Cop’’ — who, when he isn’t shooting up heroin in toilets, is investigating The Driver’s long trail of bodies, and “The Killer’’ (Oliver Jackson-Cohen), a professional assassin hired to bring The Driver down.  The latter is both the movie’s most original creation and its silliest — a handsome yuppie software billionaire so bored with post-buyout life that he takes hit-man jobs for a dollar a pop. When he isn’t neurotically stalking his quarry, The Killer is fretting about emotional issues and proposing to his girlfriend (Maggie Grace of “Lost’’) via Bluetooth.

You can catch the big twist two thirds into the movie, as The Driver’s targets shift gradually from creeps to flawed dads to a testifying man of God (Adewale Akinnuoye-Agbaje).  Overall I really enjoyed FASTER and although the movie felt a litte dry at times I still felt there was plenty of story behind each charcters (which I hope will lead to future spin-off movies). FASTER has the heart of a 70’s action movie with a subtle homage to Sergio Leone’s “The Good, the Bad, and the Ugly.’’ the later of which was a suprising after thought reveal thanks to the help of a ringtone.

This entry was posted on Thursday, February 24th, 2011 at 3:17 am and is filed under Random. You can follow any responses to this entry through the RSS 2.0 feed. You can leave a response, or trackback from your own site.