Ferrari issues recall for their 458 Italia model, due to fires!!! 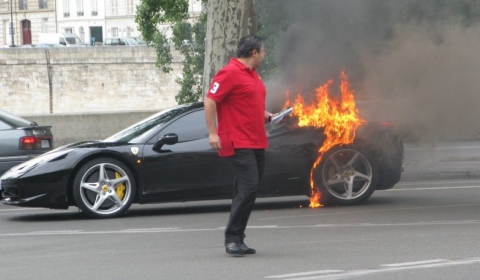 The Ferrari 458 Italia can now be added to the list of other vehicles that have been recently recalled.  Showing that recalls can affect the top end brands, Ferrari issued a recall of its new 458 Italia model after several of the vehicles suddenly burst into flames.  The cause of the fire appears to be due to a defect in the wheelhouse assembly.  A Ferrari spokesperson explained the issue to CNNMoney.com as:

“In rare instances the heat shield could become deformed, bringing it too close to the exhaust system and igniting”.

Five separate fire incidents have occurred in California, Switzerland, China and France.  In response to these fires Ferrari is recalling all 458 Italia model vehicles.  The 458 Italia model was first delivered to the US this Summer at a starting cost of $230,000. The vehicle boasts a 4.5 liter 8 cylinder engine with a 7 speed automatic transmission delivering over 570 horsepower.

The National Highway Traffic Safety Administration (NHTSA) North American division has been informed by Ferrari that 303 vehicles will be recalled, and the owners may be eligible for reimbursement if they previously paid for repairs associated with the fire issue.

This entry was posted on Tuesday, September 7th, 2010 at 11:57 pm and is filed under Motorsports. You can follow any responses to this entry through the RSS 2.0 feed. You can leave a response, or trackback from your own site.

One Response to “Ferrari issues recall for their 458 Italia model, due to fires!!!”