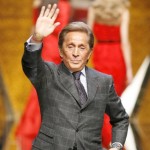 The only label to have designed wedding dresses for both Jackie O. and J. Lo, Valentino is synonymous with opulence, extravagance, and drama. In business since 1960, Valentino Garavani made his mark early with intricately detailed, luxurious gowns and tastefully body-conscious silhouettes—even perfecting his own shade of Valentino Red. The year 1968 introduced the groundbreaking White collection as well as the now-iconic V label. Thanks in part to the entrepreneurial skill of Giancarlo Giammetti, Valentino’s longtime business partner and ex-boyfriend, the brand is still manna among European royalty, American socialites, and celebrities craving a touch of class. Though his new creations get a great deal of attention—and requests, especially around red-carpet time—his vintage dresses continue commanding attention (remember the black gown with white piping Julia Roberts wore to accept her Oscar in 2001? So do we). To the horror of loyal fans across the globe, Valentino announced his retirement in 2007. Since he hadn’t groomed an heir, the label is still trying to find its footing: Former Gucci designer Alessandra Facchinetti took over as head designer until being unceremoniously fired after her spring 2009 collection. Maria Grazia Chiuri and Pier Paolo Piccioli, who had previously designed accessories for the label, were then named creative directors.

This entry was posted on Monday, September 6th, 2010 at 10:48 pm and is filed under Fashion, Women's Fashion. You can follow any responses to this entry through the RSS 2.0 feed. You can leave a response, or trackback from your own site.

One Response to “Fashion Label – Valetino”