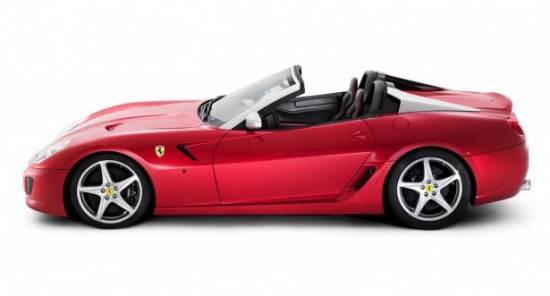 Following reports of a private viewing in Pebble Beach earlier this month, Ferrari has revealed first photos and details of the SA APERTA, a drop-top version of the 599. Production is limited to only 80 units all of which have been pre-sold.

Described as a true roadster, a removable soft top design is used which Ferrari describes should “be resorted to only if the weather gets particularly bad.” Other body alterations include a lower-angled windscreen, integrated roll-bars flanked by aerodynamic fins and a lowered suspension.

The chassis has been stiffened to compensate for the absence of the roof, however, Ferrari states that any added weight brought on by the re-engineering of the chassis is negligible.

The SA Aperta is equipped with the familiar 6.0-liter V12 producing 661 bhp, same as the recently announced 599 GTO, the road-going version of the 599XX track car.

The SA Aperta makes its public debut in Paris this week.

This entry was posted on Monday, September 27th, 2010 at 10:55 pm and is filed under Galleries, Motorsports, Motorsports. You can follow any responses to this entry through the RSS 2.0 feed. You can leave a response, or trackback from your own site.