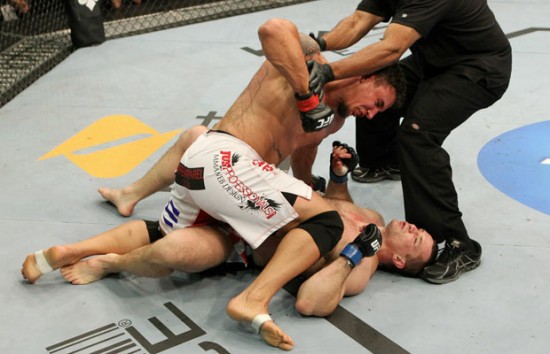 The saying goes “it’s not how you start, it’s how you finish.”

Even so, the first 14 minutes of Saturday’s main event of UFC 119 tested the patience of the 15,811 fans who packed Conseco Fieldhouse, and not even a knockout finish in the final minute of the bout could change fans’ opinions of Frank Mir and Mirko “Cro Cop” Filipovic’s heavyweight encounter as restless fans showered boos for the lack of action.

Mir spent the bulk of the fight bullying the Croatian striker into the fence and using his mass to wear down his opponent. But, Mir wasn’t active enough in the clinch, forcing referee Herb Dean to separate the two and restart the bout in the middle.

When the two did engage, it wasn’t with a flurry of fists and feet that fans were anticipating. With just over a minute left in the third and final round, a decision from the judges seemed to be the likely outcome. Then Mir landed a right knee strike to the jaw of the former Croatian police anti-terrorist commando and knocked out the 36-year-old striker to pick up his 14th career victory.

The fans’ dissatisfaction was also shared by the victor in the post-fight press conference.

“The only thing I can take from this is that I beat him without a single takedown. That’s the only positive I take from this,” Mir said. “I can breathe easy that it didn’t go to a judges’ decision. I guess a sloppy win is better than a sloppy loss. That being said, the knockout was the only highlight. I’m completely upset with my performance.”

This entry was posted on Sunday, September 26th, 2010 at 11:02 pm and is filed under MMA, Sports. You can follow any responses to this entry through the RSS 2.0 feed. You can leave a response, or trackback from your own site.