Hollywood has lost a great star. Leslie Nielsen, who made audiences laugh with his ridiculous seriousness in the absurd scenes of comedy films like Airplane! and The Naked Gun has died. He was 84. 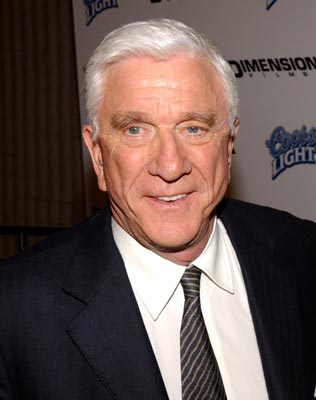 His agent, John. S. Kelly, confirmed that the actor died Sunday near his home in Fort Lauderdale, Fla., surrounded by his “lovely wife and friends” at 5:34 p.m. ET, due to complications of pneumonia.

Nielsen had been hospitalized for nearly two weeks as a result from pneumonia, his agent said.

“Just in this last 48 hours, the infection has gotten too much,” his nephew Doug Nielsen told canadian radio station, CKNW. “He just fell asleep and passed away.”

Born in Saskatchewan, Canada, where his father was a member of the Royal Canadian Mounted Police, Nielsen began his career in television in the 1950s, after training at New York’s Neighborhood Playhouse.

He found early success as a dramatic actor in the 1972 blockbuster The Poseidon Adventure (he played the captain of the doomed ship) and on TV shows like Bonanza and The Fugitive.

But behind the scenes, he was reportedly known as a prankster. Landing his role as Detective Frank Drebin on TV’s Police Squad would prove to be a turning point in his career, as that became the basis for the Naked Gun movies.

In 1998, the actor told The New York Times: “It’s been dawning on me slowly that for the past 35 years I have been cast against type,” he said, “and I’m finally getting to do what I really wanted to do.”

Nielsen is survived by his fourth wife, Barbaree Lee Neilsen, and two daughters, Maura Nielsen Kaplan and Thea Nielsen Disney, both of whom appeared alongside their father in the comedies, Dracula: Dead and Loving It and Wrongfully Accused. His brother Eric was deputy prime minister of Canada from 1984 to 1986.

While Nielsen “enjoyed a more than 60 year career in motion pictures and television,” as Kelly noted in his statement, his signature line from Airplane! will surely be remembered as one of comedy’s best: Said Nielsen, as Dr. Rumack, “I am serious . . . and don’t call me Shirley.”

We at EvilStar would like to send out our condolences to Nielsen’s friends and family. He was a great actor and an equally great person. He will be missed tremendously. God speed brotha.

This entry was posted on Monday, November 29th, 2010 at 1:48 am and is filed under Random. You can follow any responses to this entry through the RSS 2.0 feed. You can leave a response, or trackback from your own site.

One Response to “Leslie Nielson dies at 84”