The news is out! November 23rd Karl Lagerfeld was announced to be the third designer in a new designer series of collaborations at Macy’s. Whatever Karl decides to design for Macy’s the cost of the garments will be significantly less then he has ever done before. Although Lagerfeld was the first to design for H&M, this is a new fashion vehicle to conquer. Li & Fung, a licensing firm based out of Hong Kong that represents many other labels such as; Rachel Zoe and Jennifer Lopez’s line at Kohl’s, will be handling licensing for Karl Lagerfeld at Macy’s as well. 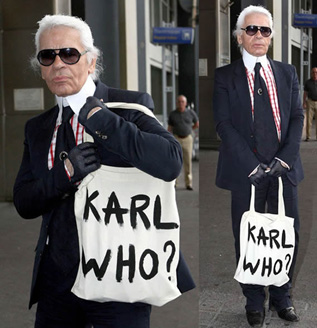 It is always refreshing to hear a loved and adored designer is going to create a line that everyone can purchase. This economical downfall has given us the opportunity to take advantage of the crisis and create clothing at affordable prices for the average Joe. Although some would argue that the designer is losing their exclusivity when creating a line anyone can buy. In all reality, it’s smart. Who wouldn’t want a garment created by a genius that has single handedly created the world’s best garments for Chanel and Fendi. The average Joe deserves to enjoy the fruits of fashion as well. Karl’s line is to hit stores next fall. Make sure you keep an eye out.

Tags: Melissa The Great
This entry was posted on Monday, November 29th, 2010 at 1:43 am and is filed under Fashion, Women's Fashion. You can follow any responses to this entry through the RSS 2.0 feed. You can leave a response, or trackback from your own site.