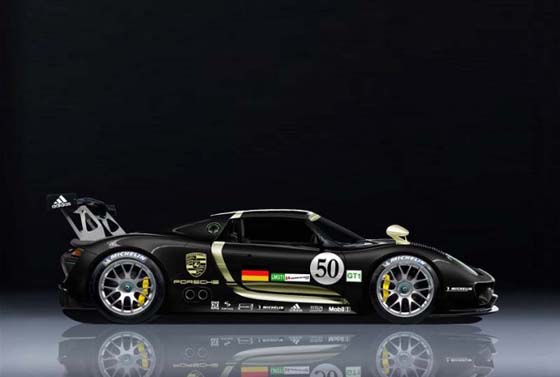 This ain’t your average tree hugger hybrid!!! Take a look at Porsche’s 918 RSR, which just rolled onto the company’s stage at the 2011 North American International Auto Show. It has a 563hp traditional gasoline engine mounted amidships, with a pair of electric motors powering the front wheels that bring the total power up to a whopping 767. The electric motors are not powered by a set of batteries, as in a traditional hybrid, rather they take their power from an inertial flywheel mounted where the passenger seat would be on a road car and spinning at up to 36,000rpm. That’s spun up by momentum when the car brakes and, when the driver hits a button, that momentum is converted to give an acceleratory boost.

That’s the same setup as the 911 GT3 RSR Hybrid, which ran reasonably successful last year. Its styling is obviously an extension of the 918 Spyder, with a number of cues taken from the incredibly successful Porsche 917 racer of the early ’70’s. At this point Porsche hasn’t indicated when this car will make its debut on the track, nor in which classes it will run, but one thing’s for clear: this isn’t for the road. So, we’re a bit disappointed we still haven’t any firm details on a production, street 918 — not that we could afford it anyway.

Tags: 918 spyder, Porsche, Spyder
This entry was posted on Tuesday, January 11th, 2011 at 12:42 am and is filed under Motorsports, Sports. You can follow any responses to this entry through the RSS 2.0 feed. You can leave a response, or trackback from your own site.