The maker of Power Balance sports wristbands has reached a tentative agreement to take over naming rights at Arco Arena. A sources say Power Balance LLC has made a tentative agreement for a five-year deal. Arco’s agreement runs out after the end of the NBA season, ending a 25-year relationship. Its departure leaves the Maloof family, which owns the team and the building, searching for a replacement in a down economy. 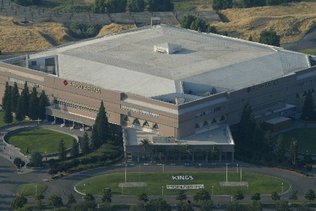 Spokesmen for the Kings and Power Balance had no comment on the deal, which was originally reported by the Sactown Royalty fan Web site.

Power Balance, based in Laguna Niguel, is a $35 million-a-year maker of trendy silicone wristbands worn by such athletes as Lamar Odom of the Los Angeles Lakers and soccer star David Beckham. The company has run into some controversy; its Australian website recently posted a statement saying there’s no “credible scientific evidence” supporting the company’s claims about the health effects of the wristbands.

Word on the street is Power Balance will be adding new holographic stickers to building for improved strength, balance and flexibility during eathquakes. Unfortunitily “there is no credible scientific evidence that supports the claims” that this will work.

Tags: Power Balance
This entry was posted on Thursday, January 13th, 2011 at 1:33 am and is filed under Sports. You can follow any responses to this entry through the RSS 2.0 feed. You can leave a response, or trackback from your own site.