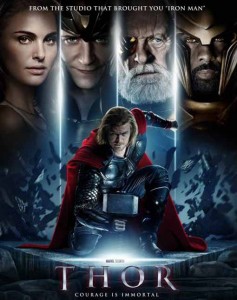 The Marvel universe moves into the cosmic realm with the 3D Thor, the mighty god of thunder. It’s a noisy, universe-rattling spectacle full of sound and fury with a suitably epic design, solid digital effects and a healthy respect for the comic-book lore that turned a mythological Norse god into a founding member of the superhero team known as The Avengers. A Shakespearean play of feuding fathers and sons.  The movie’s dramatic arc falters amid the constant shifts between earthly and celestial realms.

The ultimate accessibility of Thor’s fantastical world is due in no small measure to the good-humored direction of Kenneth Branagh, a man knows his way around an epic tale, and a star-making performance from Chris Hemsworth. The ladies will love 6-foot-3 Hemsworth, he brings a lusty Viking charm to his rumbling Olde English line readings, a towering physicality and biceps that look forged in a furnace. The man is ripped, can’t say I wasn’t a little jealous.

Thor crashes into being in a desolate stretch of New Mexico desert, his face planted inelegantly against the windscreen of an RV driven by Natalie Portman’s storm-chasing scientist Jane Foster.

As Jane, her mentor Dr. Erik Selvig (Stellan Skarsgard) and sidekick Darcy (Kat Dennings) puzzle over his provenance, we whip back in time and space to the floating kingdom of Asgard, where Thor’s father Odin (Hopkins), the ruler of all nine realms, fills in decades of back story in voiceover.

Back in the desert, we get some solidly amusing fish-out-of-water antics as the mighty Thor struggles to adapt to his mortality and a world of Facebook and iPods, but scriptwriters Ashley Edward Miller, Zack Stentz and Don Payne working from an effective origin story by J. Michael Straczynski and Mark Protosevich, have their eye on a bigger prize.

The action pinballs between Asgard, the desolate ice planet of Jotunheim, and Earth, where a S.H.I.E.L.D. agent from the Iron Man films (Clark Gregg) is making it difficult for Thor to retrieve his magic hammer and save the humans and the kingdom of Asgard from the forces that would destroy them.

Tags: Anthony Hopkins, Chris Hemsworth, Movie Review, Natalie Portman, Thor
This entry was posted on Monday, June 6th, 2011 at 11:40 pm and is filed under Random. You can follow any responses to this entry through the RSS 2.0 feed. You can leave a response, or trackback from your own site.