Transformers: Dark of the Moon

Michael Bay’s “Transformers: Dark of the Moon” received terrible reviews from critiques but praise from audiences. Scoring a 38% and 90% respectively on RottenTomatoes.com 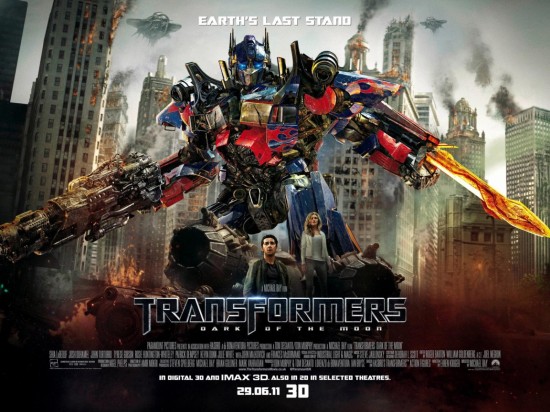 While Michael Bay’s “big film/big budget formula” may not appeal to all it does attract a crowd, making $162.1M at the box office so far. The movie was everything I expected awesome special effects, lots of action, and not much story. Transformers 3: Dark of the Moon was better than Transformers 2: Revenge of the fallen in all but once capacity (I miss Megan Fox). Do not watch this movie if you are expecting Shakespeare but a must see if you like senseless action packed block busters full of special effects.

We learn that mankind’s first mission to the moon was intended to investigate an alien space craft that crashed on the dark side. This ship, “the Arc,” carried the Autobots last hope to our solar system a long time ago.

Tags: Autobots, Dark of the Moon, Decepticons, Movie Review, Transformers, Transformers 3
This entry was posted on Tuesday, July 5th, 2011 at 10:01 am and is filed under Random. You can follow any responses to this entry through the RSS 2.0 feed. You can leave a response, or trackback from your own site.