Buyers are saying yes to Audi.  You may have noticed a recent upsurge in the amount of Audis on the road.  So much that they are having trouble keeping up with U.S. demand, says Johan de Nysschen, president of Audi of America. 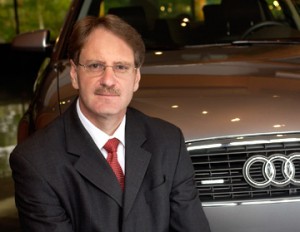 “We’re down to a 27-day supply now,” de Nysschen tells Ward’s in an interview at the New York International Auto Show. “We simply can’t get our inventory up to (an optimum) 60-day supply.”

“It’s quite challenging,” the Audi chief says. The small number of choices on Audi dealer lots is pushing up custom ordering. “It’s up to 31%,” de Nysschen says.

“That’s high for us and unsustainable because we’re losing business opportunities and causing our 277 dealers some consternation.  I have no doubt that some of our dealers are unprofitable.” But he says Audi dealers average a 3.27% return on sales.

Audi is intent on maintaining profitability. However, de Nysschen admits Audi is challenged to compete on average selling prices with its German luxury competitors. “Their sales mix is far richer than ours,” he says.

Also, Audi’s U.S. prices overall are lower than in other markets, giving us the  best value.

“That’s something we have to address,” de Nysschen says. “In other markets, Audi does much better in richness of business.” One of his targets is to increase A6 sales from the current 15% to 55%.  “A big focus of our business going forward is to sell more high-end cars.”

Audi also is targeting more diesel sales. De Nysschen predicts half of Q7 CUV sales will be diesel models. “But (again), we are so significantly under supplied and could sell twice the amount we now do. We’re competing for supply with Europe and China.”

Tags: Audi, Johan de Nysschen
This entry was posted on Thursday, April 28th, 2011 at 1:40 am and is filed under Motorsports. You can follow any responses to this entry through the RSS 2.0 feed. You can leave a response, or trackback from your own site.