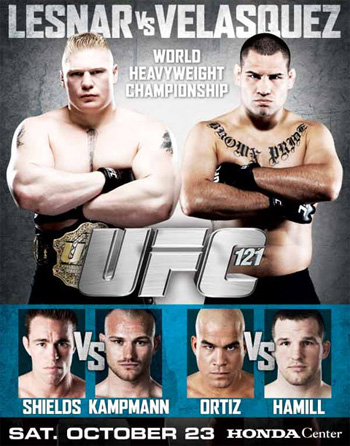 Break down of the Title Fight:

Lesnar ties up early and unloads a big hurt on Cain. Knees to the chin and chest! Holy cow! Lesnar grabs Cain’s leg and takes him down! Not even 30 seconds yet! Cain gets up and he’s on the fence. Lesnar won’t let go of his leg. They continue to grabble, then Lesnar flips his down, and Cain gets right back up…he breaks lose and they’re back to fighting in the center. Brock swinging, Cain takes Lesnar down! Rear mount, ground and pound. Lesnar back up, swinging. Lesnar rushes him, loses his balance…he spins across the cage. Lesnar in trouble! He’s down, Cain on top punching the crap out of his face. Lesnar gets turned around, protects his face, but Cain crouches on him, a knee on his chest and keeps punishing him. Cain gets up, Lesnar gets up, Cain punches him and he goes down. Hammer fists from Cain. Brock not defending himself and the ref stops the fight! It’s all over at 4:46 in the first round! Cain Velasquez wins! Brock is covered in blood! Cain Velasquez is the new UFC heavyweight champion in the world!

This entry was posted on Sunday, October 24th, 2010 at 12:23 am and is filed under MMA, Sports. You can follow any responses to this entry through the RSS 2.0 feed. You can leave a response, or trackback from your own site.