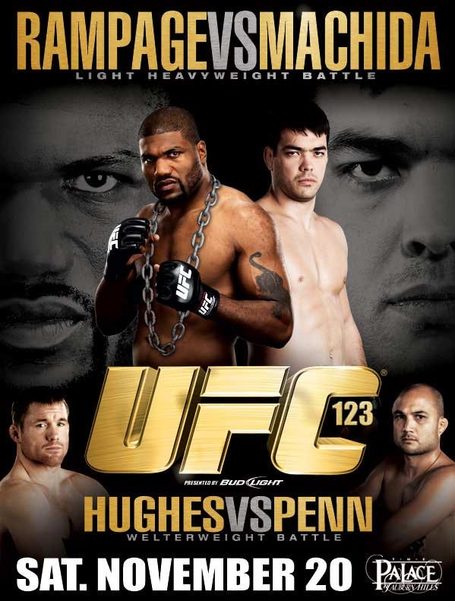 Penn and Hughes, of course, have met twice before. Penn won the first meeting via submission at UFC 46, but Hughes got his revenge at UFC 63 and scored a third-round TKO. Hughes lost his long-held welterweight belt for the first time with the UFC 46 loss. Prior to UFC 63, he reclaimed the title with a win over Georges St-Pierre and successfully defended it with the Penn victory.

Hughes (45-7 MMA, 18-5 UFC), who was once on the verge of retirement in recent years, has found new life in the UFC’s loaded welterweight division. After a 1-3 skid that saw him lose his belt, the recent UFC Hall of Fame inductee has rebounded with consecutive wins over Matt Serra, Renzo Gracie and Ricardo Almeida.

Penn (15-7-1 MMA, 11-6-1 UFC) , meanwhile, looks to gain some traction at 170 pounds following his quick descent at lightweight. Once the world’s universal No. 1 ranked 155-pounder, Penn lost his belt to Frankie Edgar at UFC 112 and then suffered another decision loss to “The Answer” at UFC 118 in an August rematch. Perhaps surprisingly, Penn hasn’t fared well at 170 pounds and owns a career 1-3 mark in the division.

Tags: 123, B.J. Penn, Machida, Matt Hughes, MMA Legends, Rampage, UFC
This entry was posted on Saturday, November 6th, 2010 at 1:05 am and is filed under MMA, Sports. You can follow any responses to this entry through the RSS 2.0 feed. You can leave a response, or trackback from your own site.