Actor Wesley Snipes was ordered on Friday to start serving a three-year prison sentence for failing to file income tax returns by a federal judge who rejected the Hollywood star’s bid for a new trial. 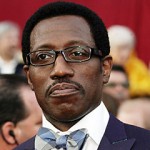 “The defendant Snipes had a fair trial … The time has come for the judgment to be enforced,” U.S. District Judge Terrell Hodges said in his ruling.

Revoking bail for the 48-year-old star of the “Blade” trilogy, the judge ordered him to report to prison as directed by the U.S. Marshals Service or Bureau of Prisons. It was not clear when or where Snipes would begin serving his time behind bars, however. His lawyer, Daniel Meachum, has said he would appeal if a new trial was denied. Meachum told the Orlando Sentinel the ruling was shocking.

“Wesley is very disappointed but staying strong and positive,” the newspaper quoted Meachum as saying.

Snipes had already lost his appeal of the prison sentence stemming from his 2008 conviction in Hodges’ Ocala, Florida, court on three counts of “willful failure to file tax returns” for 1999 through 2001. Snipes was found not guilty of five other counts in the high-profile felony tax case. In seeking a new trial, Meachum had argued that jurors in the original trial were biased and that the prosecution’s star witness had his own criminal problems.

At his sentencing, prosecutors said Snipes, a resident of Windermere, Florida, had earned more than $38 million since 1999 but had filed no tax returns or paid any taxes through October 2006.

Although he is best known for his roles in action films, Snipes has also had critical success in comedies like “White Men Can’t Jump” in 1992. He played the lead in director Spike Lee’s interracial drama “Jungle Fever” in 1991 and also played the jazz saxophonist in Lee’s “Mo’ Better Blues” in 1990. Eric Thompson, a supervisor in the U.S. Marshals Service office in Orlando, Florida, said the Bureau of Prisons would notify Snipes and his lawyer of a surrender date.

“He’ll probably get it by certified mail,” Thompson said.

He declined to say what prison was likely to be selected for Snipes except to say that it would not be in Florida. A listing for Snipes already posted on the Federal Bureau of Prisons website says his prisoner ID or registration number as 43355-018, his location is “in transit” and his release date is “unknown.”

This entry was posted on Saturday, November 20th, 2010 at 2:21 am and is filed under Random. You can follow any responses to this entry through the RSS 2.0 feed. You can leave a response, or trackback from your own site.