Set to launch next year, the 2012 C-Class Coupe has shed some of its camo, and has even given up its interior secrets. The C-Class Coupe will feature a revised interior that will also surface in the updated version of the C-Class sedan. 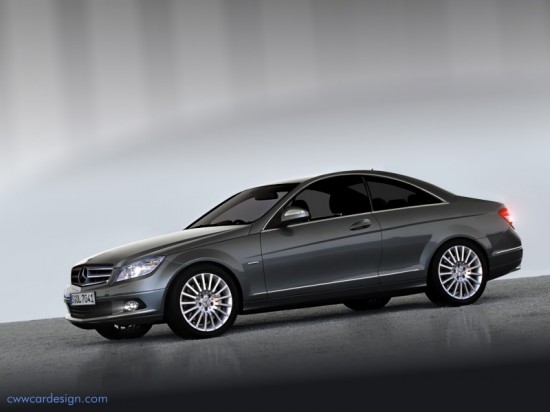 The C-Class Coupe will be developed and produced at the Bremen plant, on the same assembly line as three existing models.

Mercedes stopped short of releasing specifics on the C-Class Coupe, stopping simply at confirming a 2011 introduction and the whereabouts of its origin. The current C-Class offering price from $33,600 in the U.S., and start with a base 3.0-liter 228 horsepower V6 with a rear-wheel drive platform. The C-Class also offers a 268 horsepower 3.5-liter V6, but commands a $6,000 premium for its 40 horsepower improvement.

We expect the same aforementioned drivetrains to be offered on the C-Class Coupe at its introduction, with a future AMG model like that of the existing C63 AMG Sedan – starting at $57,350 and powered by a 451 horsepower 6.3-liter V8 – a possibility. Although an AMG variant is almost certainly in the cards for the C-Class Coupe, everybody anticipates a switch to a smaller 5.5-liter V8, coupled with twin-turbochargers as Mercedes moves towards smaller, more fuel efficient engines.

“The decision by the Board of Management to produce the Coupé version of the current C-Class here in Bremen as well represents another important milestone on our way to becoming Mercedes’ competence centre for the C-Class and is a clear sign of the trust in the Bremen team’s capabilities and standards,” says Peter Schabert, head of Mercedes-Benz’ Bremen plant.

Tags: 2012, C-Class, Coupe, Mercedes, Mercedes Benz
This entry was posted on Monday, January 3rd, 2011 at 12:33 am and is filed under Motorsports. You can follow any responses to this entry through the RSS 2.0 feed. You can leave a response, or trackback from your own site.