I am so excited, like a kid on Christmas! The German DTM touring-car series has announced plans to stage races in the United States in 2013, with its high-performance four-door sedans competing on the same program with NASCAR and Grand American Road Racing events.

DTM, the abbreviation for the series’ official title, Deutsche Tourenwagen Masters, competes on road courses at many European tracks such as the Hockenheimring, site of Formula 1 and other events. 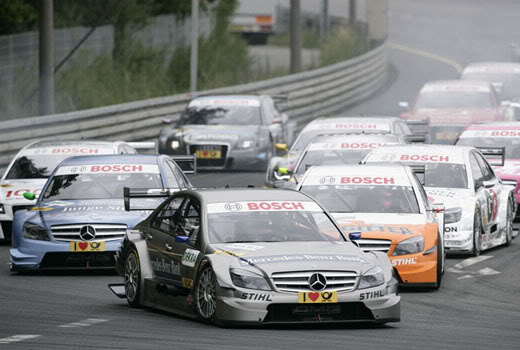 Autosport magazine reported on the comments of Hans Werner Aufrecht, director of DTM’s management group. “Beginning in 2013, we hope to have a championship with 12 races in the United States,” Aufrecht said. He added that six races are to be staged with Grand-Am and six with NASCAR events.

NASCAR’s premier Sprint Cup Series presently competes on only two road-course venues, Infineon Raceway in California and Watkins Glen International in New York. The Grand-Am series is closely affiliated with Daytona Beach, Fla.-based NASCAR. The series has one race at each track each year.

There are significant differences in the equipment compared to NASCAR machines. DTM and other series use production automobiles (Audis, BMWs, Mercedes-Benzes) which have been modified for racing, similar to the GT sports coupes which compete in various forms of sports car racing.

More than a year out, there are many unanswered questions about the details of this venture, but the main question is how American fans will respond to the series. Let’s all hope it’s a great response.

Tags: Audi, BMW, dtm, Mercedes Benz
This entry was posted on Thursday, October 28th, 2010 at 1:09 am and is filed under Motorsports, Sports. You can follow any responses to this entry through the RSS 2.0 feed. You can leave a response, or trackback from your own site.

Leave a Reply to imlow jim