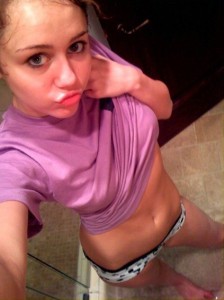 Oh Miley, you make it so easy to make fun of you!!!

Miles turned 18 just last month, but she’s already five minutes away from a sex tape and her first trip to rehab. In the video obtained by TMZ, Cyrus is taped “tripping” at a belated birthday party at her Los Angeles home just five days after her 18th birthday. She can be seen smoking the herb salvia through a bong. Salvia, which has psychedelic qualities, is legal in California. It is often compared to the effects which a user gets from LSD.

Next Miley breaks into an impromptu rap, imitating Nicki Minaj’s verses on the Trey Songz collaboration “Bottoms Up.” The footage is believed to have been leaked by one of the starlet’s pals.

We know that this probably became an age-old question after her umpteenth nearly-nude picture scandal, but “What the Hell Happened to Miley Cyrus?!” Once a cute Disney star with a famous dad, Miley is now a sexually charged vamp, who has completely transformed herself in a few short years. From accusations of racism to pause-worthy lapdances and barely-there clothing, Miley has gone the way of Britney Spears — and it could get worse.

This entry was posted on Sunday, December 12th, 2010 at 2:12 am and is filed under Random. You can follow any responses to this entry through the RSS 2.0 feed. You can leave a response, or trackback from your own site.