Manny Pacquiao proved beyond a doubt Saturday night what most people believed coming into his super welterweight championship fight against Antonio Margarito – that size doesn’t matter as much as speed and quickness. And heart. Pacquiao, 17 pounds lighter than Margarito at the opening bell, had too much of everything for Margarito and won extending his record to world championships in eight different weight divisions. Nobody else has more than six. 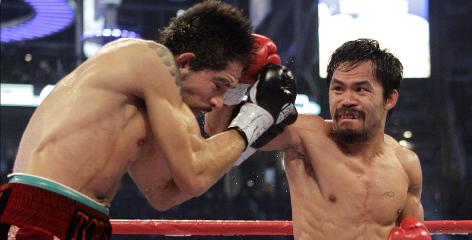 Pacquiao (59-3, 39 KOs) put on a boxing clinic, dominating the fight from start to finish, landing combinations at will as Margarito could not protect his face. By the end of the fight, Margarito’s face was a bloody, swollen pulp. But he never gave up.

“I was looking for a chance to stop the fight in the 10th round,” said Pacquiao. “But Margarito kept fighting back.”  In the 11th round, Pacquiao said he asked the referee to stop the fight. “My opponent looked bad, I wanted him to stop it,” Pacquiao said. ” I said, ‘look at his face. ‘ I didn’t want to damage him permanently. That’s not what boxing’s all about.”

Pacquiao said Margarito hurt him a few times when he was up against the ropes in the middle and later rounds. “He hurt me in the body and in the face,” Pacquiao said. “He’s tougher than I thought. It was a hard fight. I did my best to win that fight. I can’t believe I beat someone that strong and big.”

Margarito gave Pacquiao his props afterwards. “He’s the best fighter in the world,” Margarito said of the Filipino champion and congressman. “He’s just too fast. It’s hard to land a punch on that guy.”

Tags: Boxing, Margarito, Pacquaio, Results. fight, vs
This entry was posted on Sunday, November 14th, 2010 at 1:54 am and is filed under Sports. You can follow any responses to this entry through the RSS 2.0 feed. You can leave a response, or trackback from your own site.