Adapted by from the 2005 French film “Anthony Zimmer,” about an ordinary man drawn into an extraordinary world, “The Tourist” is so lacking in pace, involvement and excitement that by the time its numerous plot twists materialize we can’t be bothered to care. 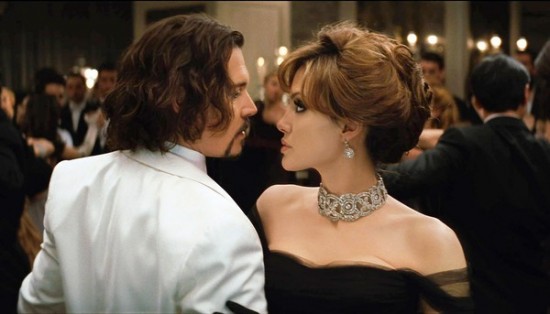 “The Tourist” begins in Paris with a crack French surveillance team focusing its attention on one Elise Clifton-Ward. Though she doesn’t look particularly dangerous, Elise has caught the eye not only of the French police but also of Scotland Yard’s Financial Crimes Division and even Italian Interpol. That’s because her inamorato, Alexander Pearce, is a financial wizard who is wanted in 14 countries and has ruffled feathers around the world with his fiscal chicanery. Since no one knows what Alexander looks like, he has concocted a plan to throw the police off his trail. He instructs Elise to take the high-speed TGV to Venice, select someone on the train who shares his height and build and try to persuade the world’s police that this harmless nobody is the great financial wizard. Depp plays Frank Tupelo, a math teacher from Wisconsin who is such a timid, unworldly type he tries to be understood in Spanish when he’s in Italy.

So even though Elise more or less adopts Frank, even letting him stay in her suite, her interest in him is never less than implausible. And when Frank finds himself thrown into a dangerous world of cut-throat killers and international intrigue, his unforeseen ability to cope is not particularly convincing either.

Lured into theaters by the pairing of the most seductive film stars working today, audiences will be nonplussed to discover a not particularly thrilling thriller about mistaken identity that doesn’t come close to living up to expectations. Probably the most surprising factor in “The Tourist’s” underperformance is the startling lack of chemistry between Depp and Jolie. Any film in which the stars connect more intensely on the poster than on the screen is in a world of trouble, and a combination of Jolie playing dress-up and Depp doing dressed down dooms their connection.

Tags: Angelina Jolie, Anthony Zimmer, French film, Johnny Depp, Movie Review, The Tourist
This entry was posted on Friday, December 10th, 2010 at 1:41 am and is filed under Random. You can follow any responses to this entry through the RSS 2.0 feed. You can leave a response, or trackback from your own site.