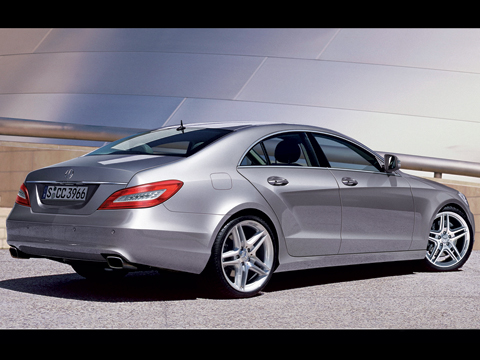 Mercedes-Benz has just unveiled the first images and video of the new Mercedes-Benz CLS, which will be presented at the Paris Salon in early October. We can expect more engine details to be revealed once the 2012 CLS-Class debuts at the Paris motor show which runs October 2 – 17, 2010.

The new and improved Mercedes CLS brings a more full-bodied design, with an emphasis on the front end, with its (Audi inspired) headlight assembly composed of LEDs, and exclusive interior refinement. After the preview in the French capital, the news must reach the European market in the second half. According to Mercedes, even with the reformulation, the model did not miss the essence deployed since its creation in 2004.

The four-door coupe was much like the concept shown in sculpture form earlier this year at the Detroit Motor Show.The engine family shall be composed of two diesel engines, a 250 CDI with 201 horsepower and a 350 CDI with 261 hp. There will also be two gasoline options, a 3.5-liter V6 with 301 hp and another 4.7 liter V8 of 429 hp, which will be the AMG option. New technology on the CLS-Class includes the (Audi inspired) LED headlamps, which feature a total of 71 individual lights.

The car lights are split into three sections, with the upper set forming the turn indicator, the middle serving as a low beam side light which also works when the high beams are on. There are the headlights themselves which do the night lighting.

CLS’s competitors are: Aston Martin Rapide, the Porsche Panamera, Audi A7 and the Volkswagen CC.

Tags: 2012, cls, Mercedes, new car
This entry was posted on Thursday, September 2nd, 2010 at 2:22 am and is filed under Motorsports. You can follow any responses to this entry through the RSS 2.0 feed. You can leave a response, or trackback from your own site.